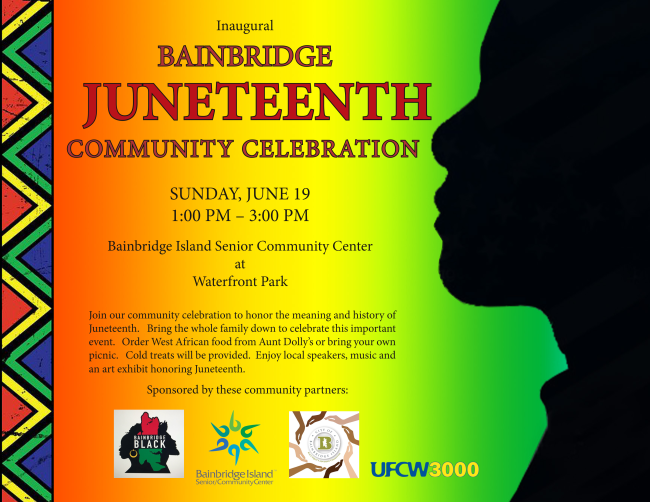 The event will include local speakers from the island’s Black Community, plus West African Food from Aunt Dolly’s for purchase, Black music streaming, a free art exhibit and general celebration honoring Juneteenth.

“Juneteenth” is the oldest nationally celebrated commemoration of the ending of slavery in the United States. Dating back to 1865, it was on June 19th that the Union soldiers, led by Major General Gordon Granger, landed at Galveston, Texas with news that the war had ended and that the enslaved – some 250,000 black people – were now free. Although the ratification of the 13th Amendment to the U.S. Constitution in December 1865 ultimately abolished slavery in all areas of the nation, “Juneteenth captured the jubilation of the end of slavery in the Confederacy,” according to published reports.


The local event will be hosted by the City of Bainbridge Island’s Race Equity Advisory Committee, in collaboration with Bainbridge Black, Bainbridge Island Senior Community Center, and the United Food and Commercial Workers Union 3000.

“Come and celebrate the liberation of Black people from slavery and hear about the ongoing work of race equity on Bainbridge Island,” says a City press release. “Everyone is welcome!”

City Hall will be closed Monday, June 20 in observance of Juneteenth.

Advertise with The Island Wanderer Blog