Depending on where you live on the island, or in Kitsap County, Coyotes are part of the natural landscape. We usually hear them at night yipping and yapping somewhere in the distance. That sound should be a gentle reminder to us all that in spite of our beautiful homes and our sophisticated life styles, we’re really not that far removed from nature and all it has to offer.

Our current snow event has really brought this home. Birds are flitting all around our feeders. We identified at least eight species, including Northern Flickers, Morning Doves and Juncos. Rabbit tracks can be seen all over the yard and squirrels are racing up and down trees foraging for food, much of which are droplets from the bird feeder. 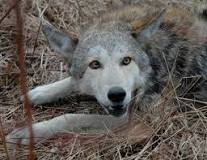 This morning, we woke up to a rare treat:  three – that’s right – three coyotes sashaying around our backyard. Like lots of folks, we’ve heard coyotes – almost always at night – but have rarely seen them up close for any length of time. Usually, our glimpse has been either in the car, or on a bike, as the skinny creatures scurried in front of us on some less traveled back road. Or maybe you’ll encounter one on a hike in the woods, and once it sees you, it quickly darts away.

But this trio – possibly a local pack  (although packs usually have five or six members) – hung around for maybe five minutes – enough time for my wife to click off a few shots of these shy and elusive critters. Typically, coyotes are 30-50 pounds and are about four feet long from the tip of their nose to the last hairs on their tail. Our three visitors appeared a bit smaller than that. What were they doing? Probably foraging for food, which undoubtedly is a bit hard to come by in these snowy conditions.

According the website iNaturalist https://www.inaturalist.org, it’s not uncommon for coyote sightings to increase during the winter months, especially in parks and natural areas where foliage is sparse… “Although urban coyotes are primarily active during dawn and dusk in order to avoid human interactions, the winter season presents challenges to a coyote’s typical routine,” the web site says. “Because their main food sources such as rodents and wild vegetation are harder to come by in winter, coyotes may expend extra energy to locate food sources elsewhere. Sometimes, the search for food leads a normally wary coyote to try their luck in our neighborhoods.”

Winter can also be a time of new pack formations for some coyotes, although this is dependent on available resources and populations in a territory, iNaturalist notes.  Transient coyotes from previous litters may seek out a mate and become established in a new space. Mated pairs typically display courtship behavior and may become defensive of their mate, particularly during the height of mating season in January and February, the website continues. “Though they will not use a den until a litter is born, coyotes may begin to select or create new dens and may monitor these areas closely as pup season nears…If you come across a pair of coyotes at a comfortable distance, give them their space and leave the area. If a coyote comes too close, haze the coyote to keep their natural fear of humans intact. It is especially important to make sure that dogs are always on leash so that they do not chase wildlife or investigate a coyote’s space during this time of protectiveness.

While we don’t seem to have coyote “pest” problems on the island like some of us do dealing with deer, eating flowers and vegetables, and rabbits noshing on anything they can reach, “coyote-proofing”  your homes probably isn’t a bad idea. Says iNaturalist, “Discourage coyote activity by securing the lids on all garbage bins and replacing any carts that are easily accessible to wildlife. Never leave food scraps outdoors for wildlife, and do not feed your pets outdoors. Keep the ground below bird feeders clean from debris that attract squirrels and rodents, which in turn may attract coyotes. Especially at night, it may be best to accompany your pets when they need to go outdoors.”

So, you may ask, what is all the howling about when coyotes get stirred up at night? It’s no cause for alarm.  It’s basically these nocturnal beings’ way of  communicating with each other and establishing their territory. According to those in the know, they may also howl when they are defending a den or a recent kill (maybe your missing cat, but let’s not go there!).


From The Island Wanderer – Margaret Millmore and Kevin Dwyer – we want to wish you a very Happy New Year! And thanks for reading!

Advertise with The Island Wanderer Blog