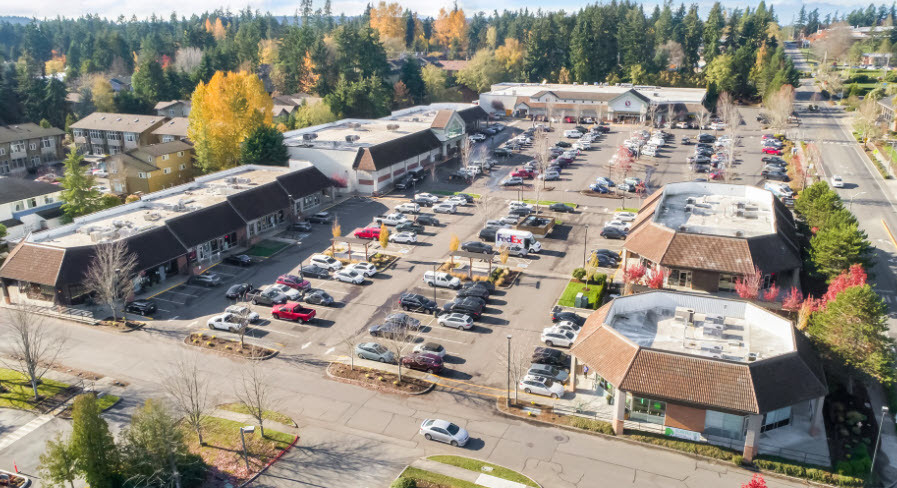 This is the first purchase in the Kitsap County area for Regency, which owns 15 other Washington retail properties stretching from Tukwila to Everett. The local shopping center is 98 percent leased, according to a press release that was sent to local media outlets.

Island Village was built back in the early 1990s and was somewhat controversial as a competitor to the stores and shops on Winslow Way.

Merchants on Bainbridge’s then main shopping district were so concerned about the construction of a Safeway store and other retailers – less than a mile from their outlets – that they formed a marketing organizing – Team Winslow – to combat the efforts. Team Winslow eventually morphed into what is now known as the Bainbridge Island Downtown Association.

When Island Village was completed and Safeway first opened its doors, some residents boycotted it in favor of locally-owned Town & Country Market. At the time, some islanders were worried that Bainbridge was on the cusp of turning into “Anywhere USA,” with Safeway and then McDonald’s opening outlets, and the fear of more national chains setting up shop. But thanks in part to some stricter zoning laws put in place at the time – reducing the area in which so-called formula fast-food joints could operate – those fears never materialized.

Today, the island’s two main shopping districts appear to co-exist, although one could argue Downtown Winslow caters more to tourists, with more restaurants, wine-tasting rooms, gift shops and the like.

“This site is a gem when it comes to its location, community and attributes,” says Patrick Conway, senior vice president and senior marketing officer for Regency Centers. “It is a highly trafficked and important shopping center with great long-term merchants, and fits right within our scope of expertise. We are looking forward to bringing our time-tested operational strategy to this destination.” Conway did not say whether the company planned any immediate upgrades or changes to Island Village.

The company did say that the island’s and immediate area populations and household bases are “growing at a rate that outpaces the surrounding markets, and are projected to continue doing so for some time…The island is a constant residential draw that is bolstered by a vibrant tourism economy.”

According to its own press materials, Regency is a preeminent national owner, operator, and developer of shopping centers located in suburban trade areas with compelling demographics. Their portfolio includes “thriving properties merchandised with highly productive grocers, restaurants, service providers, and best-in-class retailers that connect to their neighborhoods, communities and customers.” Regency Centers operates as a fully integrated real estate company.

“As a long-term resident of Bainbridge Island and CEO of Urban Renaissance Group, I am confident that this acquisition is great fit for the center’s retailers as well as our island’s residents,” said URG founder and chief executive officer Patrick Callahan. “Regency Centers are true experts on grocery-anchored retail, as well as proven long-term holders who genuinely care about the communities they operate in.”

URG is a Seattle-based commercial real estate company, engaged in acquisitions, development, asset management, leasing, property management and ownership. Founded in 2006, the strategic premise of URG is that the American City is changing. “URG acts as a catalyst that understands and ignites that change, thereby building community, creating place, (and) generating appropriate returns for its investors and opportunities for its partners and employees.”